Last night I was struck by a moment of unadulterated revelation - something was missing from my banner; something telling; some substance of the most veracious, sincere kind. More sincere than my own name and laughing face plastered across my blog? Yes. My banner felt bereft of personality, quite probably because I have had to stare at the damn thing many more times than I care to admit. Well, that was counterproductive - drat. But alas, the light bulb flashed at around 10.47pm when I came to realise that the simple solution was to affix a succint descriptive sentence that would bear the welcoming of my soul.

And at that it appeared, between the hoopla of my laughing faces. Sartorial mumbles of a quirdylike. Pretty self-explanatory, for the most part. But quirdylike? Well, now, that's a term I've coined to explain the fierce battle between the quirk and the lady in me. Current winner? 40% quirk, 60% lady, as demonstrated nicely by this Religion bow; feminine yet a little strange? A palpable movement in favour of dainty heels and waist-defining skirts represents a recent shift in mood - maturing, one might explain - the thought of which sends polka-dots of the Marni kind coursing through my veins. I don't want to mature! Forever 21. 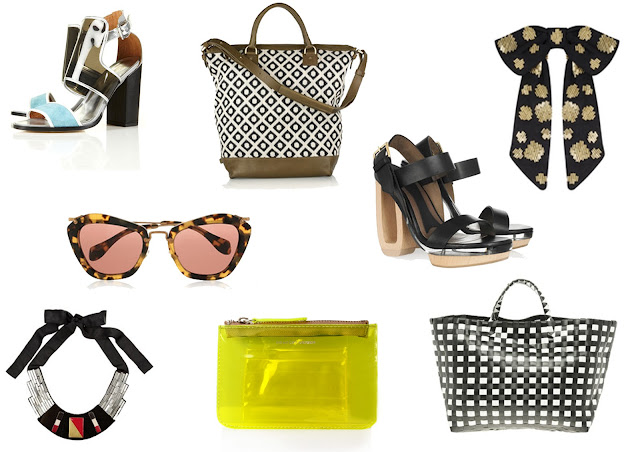 The solution? A collage comprised of 100% quirk. I've flirted with grunge, salsa danced with minimal but the strongest outcome will prevail; I was destined to be a mad Italian Aunt. Ergo, I must persevere. Here, here now. Don't feel bad for me - I am insidiously galvanised by the thought. Now, all that's left to do is stock up on all of the above - in particular these Miu Miu sunglasses which can be worn from the offset - and to have a little left over for 7 slightly tatty cats and a second-hand rocking chair.