Sitting here writing as the rain clouds my visions of optimism seems somewhat of an oxymoron personified as I post outfit shots taken while basking in what could possibly have been the very last of April summer. Yes, this was taken in the most glamorous of scenarios as I rushed back and forth between the wardrobe (the boot of my car) my changing room (the porch of Ben's house) and the stage (the street) hoping to get some decent shots in before the sun was due to be laid to rest at 7.36 pm. 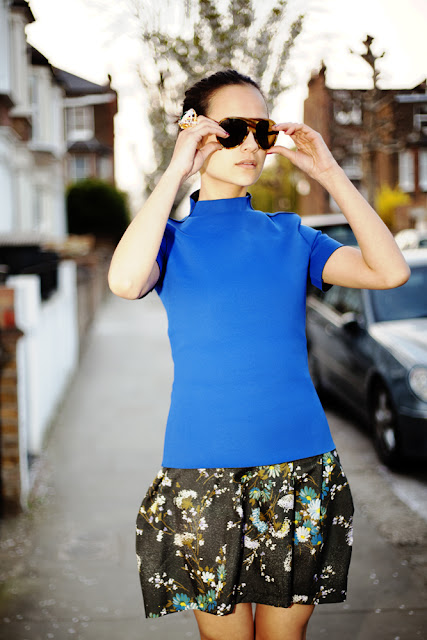 Did it work? Yes, I'd say we managed to scrape some light in the background there, wouldn't you? 'Then, funny she's wearing sunglasses, you should say.' Simple explanation here: it just looked better. 'Gasp hiss gasp.' Well, snakes of the audience, when Jay-Z and Kanye wear their sunglasses in a darkened room no-one bats an eyelid. Better yet, when Kanye wears ridiculous functionless plastic lime green glasses with holes in them the whole world follows. And I can't wait to see what this season holds for him, on that note. Hopefully less 'gasp hiss gasps' from his own audience, this time round. 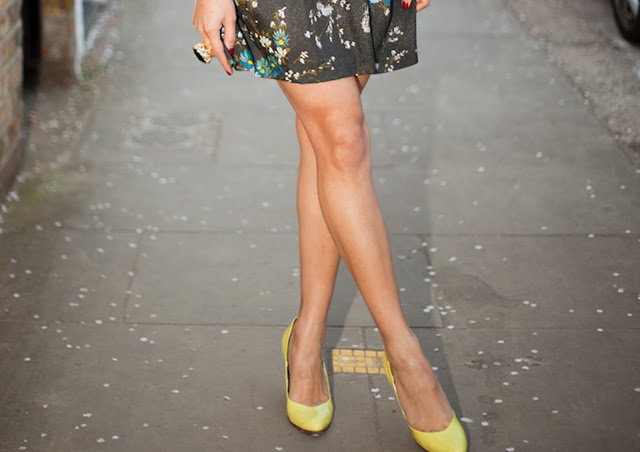 So anyway, here I am wearing a scuba top from Zara and the prettiest of vintage print skirts from Notonthehighstreet.com along with these go-with-everything sunglasses from Stella McCartney, my favourite ring from Alexis Bittar and some very old but loyally everlasting lime green courts from Marc by Marc Jacobs. The skirt is actually a little longer than it appears but I found myself reminiscing on the days when I had a penchant for higher hemlines. So, I hoisted it up, concealed the good old roll-up technique with an all-forgiving neoprene top and actually much preferred the drop waist peplum effect that was a welcome consequence.