HOW TO WEAR | LEMON

Wardrobe staples are like good art; they become more valuable - and more appreciated, hopefully - with age. There are certain staples in a woman's wardrobe, however, that sometimes, just sometimes, need a magic wave from the wands of design geniuses such as Lawrence Lewellyn Bowen, for example. Why that particular example? Because I'm convinced that a few of you will think I've been administered a placebo capsule that has sent me barking mad. Well, I don't mind a collar or two - so long as they're more Elin Kling that woof woof. 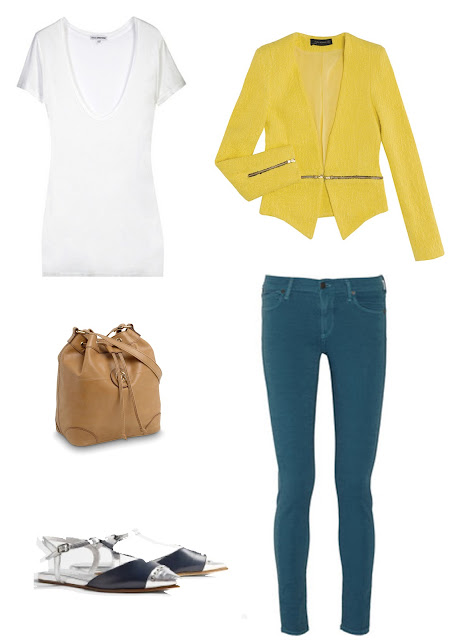 Changing Rooms was a much-loved programme - by yours truly in particular - in which unassuming and somewhat naive property owners would entrust their own bricks and mortar into the hands (and paintbrushes) of various interior designers. Said participants weren't always best pleased with the results but it was Lawrence, oh good old Lawrence, who would plead with them to allow for a period of adjustment in which they were expected to warm to their new - and often exceedingly eclectic - surroundings.
What I am trying to get at here is that one's initial reaction to adopt a lemon-coloured blazer to a family of navy seniors and grey juniors may seem unfair on the poor thing. But trust me, once you try this baby on you'll feel as though it were blood-related. When on the most pleasant of summer days you want nothing more than to throw together your favourite staples in nought minus five seconds, this perfect splash of lemon won't feel so bitter to the taste buds. Teamed with a white t-shirt (love this one) some subtly coloured jeans (love these) a great pair of metallic pointed flats (Beau Coops do great flats) and a relaxed pouch bag (great one here from Tula) you're good to go from park to pub before you can say 'yellow'.