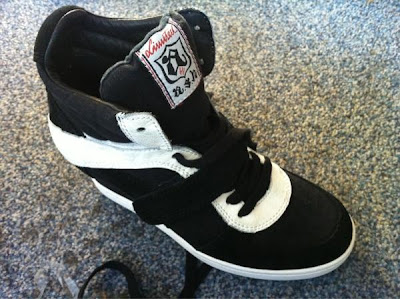 I'm a girl of many, many, many, many, many, many peculiar traits, one of them being a strong belief that going casual - or 'casz' as one might say in colloquial terms - does not suit me; Bad news - or good, depending on how they see it, not that clothes can 'see' much - for the following as this belief has led to certain 'Refused Entry' rules: that means thanks, but no thanks, to jeans, trainers, baggy jumpers, flat shoes that aren't pointed, trousers without the tailoring crease, corduroy, tracksuits... Oh really now, what I'm trying to suggest is that this rule applies to any item of clothing that could be associated with having dressed myself in a 'casz' this has since been corrected by my cousin, Danny 'cajjj' manner. Oh, well I shudder at the very thought.
So it wouldn't take a rocket scientist - or anyone who cares - to work out that trainers/sneakers/basketball shoes are not my thing. And usually, that would be bad news for these particular wedge trainers that have been kindly gifted to me from ASH (thank you!) And yet, having called in these ASH trainers to style on one of the ELLE team, I felt a strange sensation coursing through my veins as I placed them under the rail... Something along the lines of... lust? No, maybe desire? Still too strong. Anyway, whatever it was, it wasn't repulsion or dislike... A first for me, most definitely. 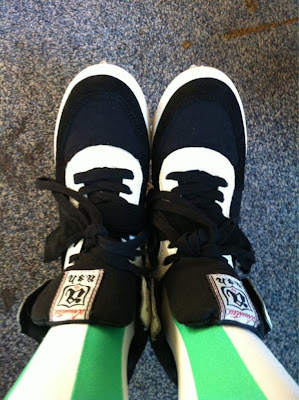 Anyway, the point being that I like them. And as we bond over the comfort they provide, I can foresee this feeling of 'like' progressing (it is very likely to have turned into love by next week).
Granted, they won't look ideal with Giambattista Valli culottes or any other tailored trousers gracing the realms of my wardrobe. BUT I will be doing an outfit post on Monday following a weekend of pensive deliberation. And then both you and I will know how trainers can be worn by the girl that doesn't wear trainers. 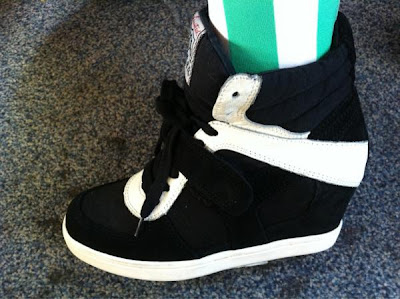