Bikini and bare midriff are not the kind of words I am interested in hearing, no. Sandals and opaque kaftans? Ah yes yes yes. Justification, I say, for my disregard for bikini shopping and considerably heightened interest in any other associated product that falls under 'beachwear'. My own fault, as it is every year, that I posses palpable dieting incompetence. Give me a concealing one piece over a junk food ban any day. 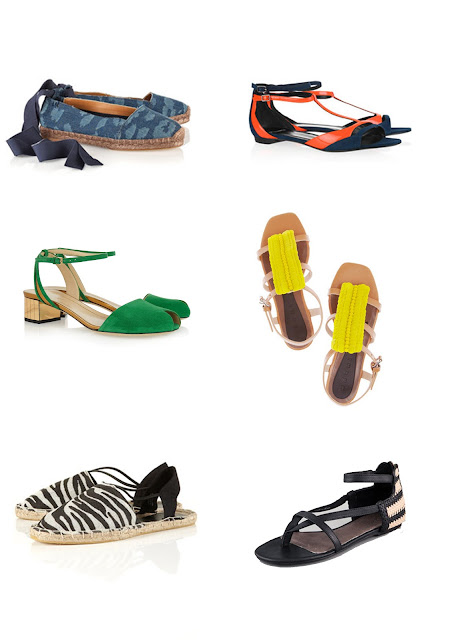 Behold, instead, a mash-up-conglomeration-mess of flats, one of which will be joining my already-purchased Balenciaga sandals on a sandy beach in just a tick. Visions of Samantha Jones in a bikini and heels had previously journeyed through the cognitive tunnel that is my brain but with many a dead end route, these thoughts have been lost indefinitely – technical difficulties. Instead, I'm sticking to a centimetre heel or lower, preferring to seem short and stubby over tall and glam but voted most likely to trip up and fall in the pull due to inappropriate footwear. Now to choose between the above. A task none the easier given that my inability to make decisions could fiercely rival if not totally dampen the triumphant lowliness of the aforementioned dieting issue.