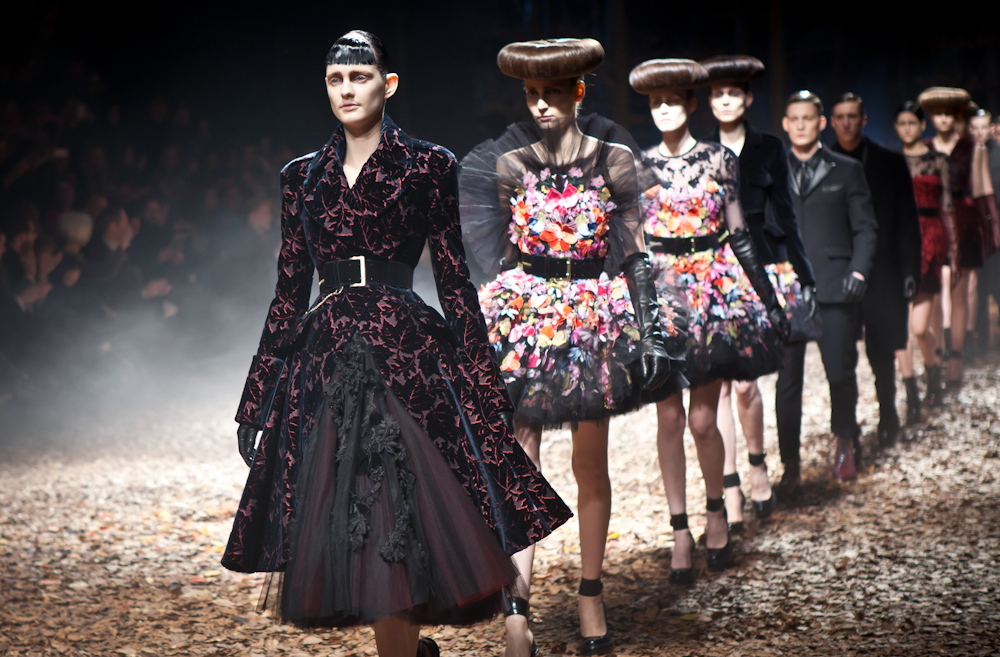 McQ. McQ, McQ, McQ. What to say about this spectacle of fallen leaves... Not many decisions would have seemed quite as logical as bringing McQ in-house. After all, there was no reason that Sarah Burton's incredible success thus far shouldn't extend to the other brand bearing the legendary designer's name. Alexander McQueen's sister brand has co-existed somewhat awkwardly alongside the theatrical, global phenomenon that is now Sarah Burton's McQueen. From McQ's beginnings almost six years ago, it had always been quite clear that the dark feminine aesthetic that is synonymous with Alexander McQueen had been lost in translation somewhere along the path to McQ's design studio. But no longer; Sarah Burton took the line, rubbed it out and re-drew it with the most precious and finely tuned of artists' pencils.
PETER PILOTTO

Christopher de Vos and Peter Pilotto can do no wrong. Taking a slowly, slowly approach this season, the pair took what they know best - prints that were strikingly similar to those of last season - and introduced puffers, fox fur and a brand new breed of what is sure to become an integral and iconic part of the Pilotto boys' print archive.
MARY KATRANTZOU

Mary, Mary, not at all contrary - aside from being one of the nicest people in the industry, she is also one of the wisest. Not many would be able to take print as their USP and use it again, again and... well, again, without boring even the least interested of people, (not that I can see why anyone would be at all disinterested in such genius.) Hailed as 'print princess', Mary introduced pencils, clocks, telephones... Embroidery, embellishment, chiffon... This season, Katrantzou was inspired by the most unlikely of things and yet, she brings it all together with the grace of one who has had many more years' experience than the young designer would be able to forge.
ROKSANDA ILINCIC

Roksanda brought a darker aesthetic to her autumn/winter collection. Straying - as she rarely does - from the Roksanda silhouette, the statuesque designer introduced pencil skirts, gingham and fur. And yet, every single piece still has Roksanda Ilincic written all over it. Not least because it is written in the label, mind you, because it is. But I find that the strongest designers are recognisable from the most obscure of their own creations, and by golly, Roksanda is one of them.